9 Images from NFT History are up for auction in May

A group of 10,000 unique pixel art images were originally inspired by the London punk scene.  They were developed in 2017 by Matt Hall and John Watkinson, the founders of the New York-based software company Larva Labs.

Hall and Watkinson originally gave away the CryptoPunks for free, holding back just 1,000 for themselves (in case they became popular) and they will now sell a group of nine of them together for $7m-$9m.

sometimes history can be defined in a relatively brief time frame

“The Cryptopunks are the alpha and omega of the [crypto art] movement,” Noah Davis, a specialist in Post-War & Contemporary Art at Christie’s, New York said during the announcement for the upcoming auction. Davis added, “This is a historic sale.”

The Cryptopunks were the first “Non-Fungible Token” on Ethereum and the inspiration for the ERC-721 standard that powers most digital art and collectibles.

Cryptopunks were originally launched on June 23, 2017.

Christie’s presented the concept from the creators of the CryptoPunks:

‘The core of the idea was that every character should be unique,’ says Larva Labs. ‘The advantage of generative art is that the process, once set in motion, can produce results that are even surprising to us. We ran the generator hundreds of times, reviewed the results, and made adjustments. Then, with little fanfare, we ran it one last time, linked it to the Ethereum smart contract that we deployed, after which the CryptoPunks were completely set in stone.’

‘Taken together, the set represents both the rarest possible CryptoPunks and highlights from the variety of attributes that are the signature of the project,’ the creators explain. In accordance with the nature of blockchain, once the project went live, Larva Labs couldn’t alter the existing series, even if they wanted to. ‘It’s odd to think of what might have been different if we had run the generator just one more time, or used the penultimate run’s output.’

The creators regard each work as individual pieces of generative art, while allowing that the entire project itself might be thought of as a larger conceptual piece. ‘It’s possibly the first work of art with a self-contained mechanism for recording and transacting its ownership.’ The MARKET FOR THE CRYPTOPUNKS

In February, CryptoPunk 6965, a fedora-wearing ape Punk, sold for 800 ether — equivalent to $1.5 million. And on 11 March 2021, CryptoPunk 7804, the previously mentioned pipe-smoking ‘wise alien,’ was sold for the equivalent of $7.5 million — the highest amount ever paid for a Punk at the time. The record was beaten the next day. The single lot of nine Punks, courtesy of Larva Labs — the project’s creators and pioneers — will appear in Christie’s 21st Century Evening Sale on 13 May in New York. 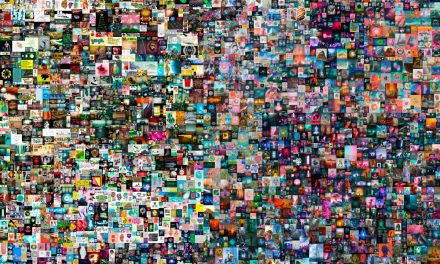